Voices From the Past: The Depression and World War II Oral History Project 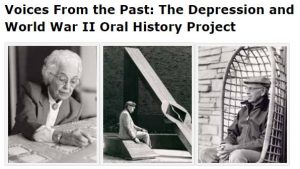 The material presented in this online version includes all of the transcribed interviews and audio clips from nine of the interviews. The photographs and video are included in full.The Friends of the Stewart Library (now Drake Community Library) embarked on an oral history project in 1992 to record the memories of a group of twenty residents who lived in Grinnell during the Great Depression of the 1930s and 1940s. The idea grew out of a reading and lecture series that featured books about the experiences of Iowans during those difficult years. In an effort to document the impact of that period on the Grinnell area, volunteers conducted one to two hour interviews that were recorded on tape and later transcribed. Photographs and brief biographies of each of the interviewees were produced for an exhibit about the project. A video describing the venture and featuring six of the residents interviewed completed the Friends’ undertaking.

Biographical information about each of the participants is presented as it was written at the time of the project. Since that time, some of those who were interviewed have passed away, making this material more precious still.

This project is the result of hundreds of hours of volunteer effort. Funds were provided by the Friends of Stewart Library and through a grant from the Iowa Humanities Board and the National Endowment for the Humanities. The online presentation has been made possible thanks to the participation of the University of Iowa School of Library and Information Science.

You will find a link below to a table of contents for this web site. For each participant you will be able to view a photo of the person, a short biography, the full interview transcript, and, for selected people, a short audio clip from their interview. There is also a link to the video.

Read Voices from the Past

Hear Voices from the Past

Watch Voices from the Past